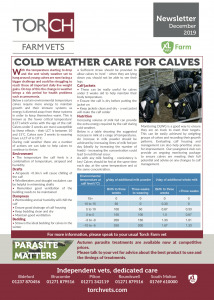 With the temperature starting to drop and the wet windy weather set to hang around; young calves are now facing a bigger challenge and could be struggling to reach those all important daily live weight gains. On top of this the change in weather brings a risk period for health problems such as pneumonia.

Below a certain environmental temperature calves require more energy to maintain growth and their immune systems as energy is diverted away from these systems in order to keep themselves warm. This is known as the ‘lower critical temperature’ (LCT) which varies with the age of the calf. Calves under 3 weeks are most susceptible to these effects – their LCT is between 10 and 15°C. Calves over 3 weeks to weaning have a LCT of 6-10°C.

During cold weather there are a number of actions we can take to help calves to continue to thrive:

Environment
• The temperature the calf feels is a combination of temperature, airspeed and humidity.
Drafts
• Airspeeds >0.3m/s will cause chilling of the calf
• Windbreakers and draught excluders can be helpful in minimising drafts
• Remember good ventilation of the building needs to be maintained Dampness
• Wet bedding and air humidity will chill the calf
• Ensure good drainage of calf housing • Keep bedding clean and dry
• Maintain good ventilation

Bedding
• Straw is the ideal bedding for calves in the winter

• Sufficient straw should be provided to allow calves to ‘nest’ – when they are lying down you should not be able to see their legs.

• These can be really useful for calves under 3 weeks old to help maintain their body temperature.
• Ensure the calf is dry before putting the jacket on
• Keep jackets clean and dry – a wet jacket will make the calf colder

Monitoring DLWG is a good way to ensure they are on track to meet their targets. This can be easily achieved by weighing groups of calves and recording their growth patterns. Evaluating calf housing and management can also help prioritise areas for improvement. Our youngstock club can provide an ongoing monitoring package to ensure calves are meeting their full potential and advise on any changes to calf management.

Autumn parasite treatments are available now at competitive prices.
Please talk to your vet for advice about the best product to use and the timings of treatments.

Thanks to all who came by to say hello to us; it was great to see so many faces both familiar and new and we hope we made sure that nobody left our stand hungry!

The afternoon seminars continued (thankfully indoors) amidst a significant turn for the worse weather-wise. Torch vet Kiera did a brilliant job outlining the huge benefits of our new milking time testing equipment to those who remained to listen to her wise words – more information can be found from your vet or local practice.

Congratulations to Mr Murch of Umberleigh who was the lucky winner of a calf jacket! If you are interested to learn the answers to our prize draw questions, they are noted below.

Well done to all of our clients who were selling/showing at the event with special congratulations to Laneslade Dairies and Leys who had first prize for best cow in milk and best heifer in milk respectively.

In case you were wondering, here’s the answers to the calf jacket competition…

1. (b) Calves should have access to water, draught free well ventilated environment, clean bedding and forage. 2. (a) You would expect to see a return of only 18.5% if using non sexed semen after losses etc.
3. (c) >22% is the cut off for good colostrum when using a Brix refratometer.
4. (c) Calves less than 3 weeks old are most vulnerable when temperatures drop below 15’C and calf jackets are advised to be used.
5. (a) You should be aiming to get heifers to 50% of their mature body weight by 12months old.

A LOOK AT THE ENFERPLEX TEST

The Enferplex blood test is one of several non-validated tests for bTB available in the UK. Non-validated indicates that the test has not been evaluated sufficiently in UK conditions for APHA to approve it for official use.

The test can still be used with permission from APHA, largely in herds where repeat skin and interferon-gamma blood testing has not resolved the infection.

How the test works:

When exposed to a virus or bacterium, the immune system manufactures antibodies targeted against antigen proteins on the bug’s outer coat. The Enferplex test works by reacting the blood sample with eleven different bTB antigens, each in its own test well on a card. If antibodies specific to an antigen are present in the blood, a colour change occurs in that antigen’s test well.

Samples taken approximately 10-30 days post-tuberculin injection will effectively have had a “booster” and the test will increase in sensitivity (fewer false negatives).

As with other diagnostic tests for bTB, the Enferplex test appears to pick up a slightly different set of infected animals within the herd. Enferplex, Gamma Interferon and the skin test can all pick up some reactors that the other tests missed.

Key factors to consider with non-validated diagnostic tests for TB in cattle:

• Defra will not be liable to pay compensation for animals that give positive results to any privately funded non- validated tests initiated by a private vet.

• Enferplex reactors cannot leave the holding, unless it is to go to slaughter at the owner’s expense. Movement restrictions will not be lifted until these animals have been either slaughtered or the whole herd passes skin and Gamma tests 6 months after restrictions would have been lifted.

To so many clients who showed their support by attending our annual hospitality afternoon at Bideford Rugby Club on Saturday 16th November.

A hearty crowd cheered on the Chiefs to a convincing 24-18 win against Teignmouth, pushing them up to fourth in the league, and celebrated accordingly afterwards!

As time marches towards the festive period, please bear in mind our opening times during the Christmas holidays:

Christmas Eve: All of our practices are open until 1pm. Our 24hour emergency service operates after 1pm.

New Year’s Eve: All of our practices are open until 5pm. Our 24hour emergency service operates after 5pm.