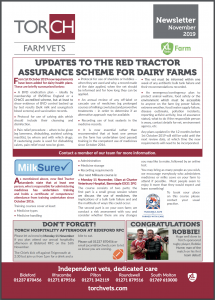 UPDATES TO THE RED TRACTOR ASSURANCE SCHEME FOR DAIRY FARMS From 1st October 2019 new requirements have been added for dairy health plans. These are briefly summarised below:
• A BVD eradication plan – ideally by membership of BVDFree England or a CHeCS accredited scheme, but at least to show evidence of BVD control backed up by test results (bulk milk and youngstock blood screens) and vaccination records.
• Protocol for use of calving aids which should include their cleansing and disinfection.
• Pain relief procedure – when to be given (eg lameness, disbudding, assisted calving, mastitis), by whom and with which drugs. If cauterising paste is used for disbudding calves, pain relief must now be given. Contact a member of our team for more information.
• Protocol for use of shackles or hobbles – when they are used and why, a record made of the date applied, when the vet should be informed and for how long they can be applied.
• An annual review of any off -label or cascade use of medicines (eg prolonged courses of milking cow tubes) and preventive treatments – in order to determine if an alternative approach may be available.
• Recording use of teat sealants in the medicine records. •
It is now essential rather than recommended that at least one person on the farm has undertaken (and passed) training in the competent use of medicines since October 2016.
• The vet must be informed within one week of any antibiotic bulk tank failure and their recommendations recorded.
• An emergency/contingency plan to protect animal welfare, food safety or the environment which must be accessible to anyone on the farm (eg power failure, extreme weather, food/water supply failure, disease outbreaks, pollution incidents, reporting activist activity, loss of assurance status), what to do if the responsible person is away, contact details for vet, environment agency, etc. Any plans updated in the 12 months before 1st October 2019 will still be valid until the next review date, at which ti me the new requirements will need to be incorporated.

As mentioined above, new Red Tractor standards state that at least one person, who is responsible for administering medicines has undertaken training and holds a certificate of competence/ attendance from training undertaken since October 2016. Training courses cover at least:

Our next Milksure course is:

The course consists of two parts; the first part is a small group session where we discuss the use of medicines, the implications of a bulk tank failure and and the multitude of ways this could occur. The second part is on your own farm; we conduct a risk assessment with you and consider whether there are any changes you may like to make, followed by an online test. You may bring as many people as you wish, we encourage everybody who administers medicines or milks cows on your farm to attend if possible. Most people seem to enjoy it more than they would expect and learn something! To book your place on this course please contact your usual practice.

Please let us know by Monday 11 November if you plan to attend our annual hospitality afternoon at Bideford RFC on the 16th November. The Chiefs kick off against Teignmouth at 2:30 but join us from 1pm for a drink and a bite to eat. Please call 01237 870456 or email jocarr@torchvets.com to let us know you are coming.

WHAT IS THE GAMMA BLOOD TEST?

The interferon-gamma test (IFN-γ or ‘gamma’) is a supplementary blood test used alongside the tuberculin skin test.

The two tests identify slightly different ‘sub populations’ of TB-infected animals; for example the gamma test can identify cattle at an earlier stage of infection, as well as infected animals that simply fail to respond to the skin test. Hence using both tests together increases the probability of detecting all infected animals in the herd. The sooner these animals leave your holding, the sooner they stop spreading TB bacteria. When does APHA use the gamma test? The gamma test is used as a supplementary test alongside the tuberculin skin test in specific TB breakdown herds. Since 1st April 2017, gamma testing is compulsory for TB breakdowns with lesions and/or culture positive animals in the High Risk Area (HRA) of England where any of the following three criteria are met;

• The most likely transmission route for the affected herd was contact with infected cattle and measures are in place to prevent further spread of disease from this source;

• There is clear evidence that repeated skin testing of the herd has failed to resolve a TB breakdown In England and Wales the gamma test is repeated as long as standard interpretation skin test reactors and/or animals with visible lesions of TB at slaughter continue to be identifi ed in those herds.

Gamma testing is usually completed before the first Short Interval Test (SIT) in new TB breakdowns. This may be at the Check Test in the case of a slaughterhouse reactor or pre-movement test failure. The blood sample is taken before the injections of tuberculin on day 1 of the test (TT1) or aft er the reading of the skin test on day 2 of the test (TT2). Animals under six months of age are automatically excluded from gamma testing as their immune systems are still developing and this can interfere with the test, leading to false positive results.

How accurate is the gamma test?

The gamma test is more sensitive than the skin test (~90% compared to ~50%), meaning it is less likely to ‘miss’ infected animals. It is also less specific than skin testing. Gamma tests will produce an average of 1 false positive result for every 30 uninfected cattle tested. The tuberculin skin test has a higher specificity of 99.98% which equates to one false positive per 5,000 disease-free animals tested. That is why the gamma test is, in most cases, only applied to lesion and/ or culture positive TB breakdown herds. In these herds the risk of taking out low numbers of false positives is outweighed by the need to identify and remove all infected cattle, and a test-positive animal is in any case more likely to be infected. A relatively small proportion of gamma test reactors show visible lesions at slaughter. This can occur for one of the following reasons;

• The animal was in the early stages of infection with M. bovis when it was detected by the test, at which point the TB lesions were too small or localised to be seen by the naked eye. This is particularly relevant for the gamma test, as it tends to identify animals earlier in the course of infection than the skin test and before any visible lesions have developed.

• The gamma test result was a genuine false-positive. As stated above, we can expect this to happen in approximately 3.5% of TB free animals

Furthermore, the gamma test is always used aft er the TB breakdown herd has been subjected to at least one round of skin testing. This means that, by the time the blood test is deployed, many of the worst affected animals (i.e. those with the most extensive lesions of TB) will have been removed from the herd.

What is Echinococcus multilocularis and where does it occur?

Echinococcus multilocularis is a tapeworm found in wildlife (especially canids and rodents) of most European countries and can cause a disease called echinococcosis. Humans can acquire infection through the ingestion of parasite eggs in contaminated food, water or soil, or aft er direct contact with animal hosts. To date, there have been no reports of Echinococcus multilocularis in the UK.

If Echinococcus multilocularis is not found in the UK, why look for it?

The UK currently enforces tapeworm treatment for dogs entering the country to prevent the introduction of Echinococcus multilocularis. However, testing of the wildlife population, which could harbour Echinococcus multilocularis is required for the UK to retain its parasite-free status. As foxes are carnivorous, readily found across the UK and at the top of the food chain, they are a suitable species for assessing the UK’s wildlife disease status.

We recently welcomed Fergus Neish to the Torch team. Fergus grew up on a beef farm in Wiltshire, breeding pedigree Aberdeen Angus, and he joins us on an internship aft er graduating from the Royal Veterinary College. In his spare time Fergus is enjoying exploring the North Devon countryside, in between watching and playing rugby