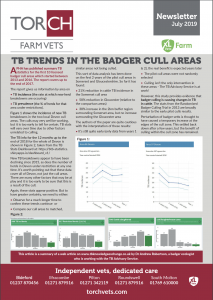 APHA has published summary TB statistics for the first 10 licensed badger cull areas which started between 2013 and 2016. The report covers up to the end of 2017.

The report gives us information by area on:

• TB incidence (the rate at which new herd breakdowns are occuring)

• TB prevalence (the % of herds for that area under restrictions).

Figure 1 shows the incidence of new TB breakdowns int he two local Devon cull areas. The culls may very well be working, but it is too early to tell for certain. TB stats will vary over time due to other factors unrelated to culling. 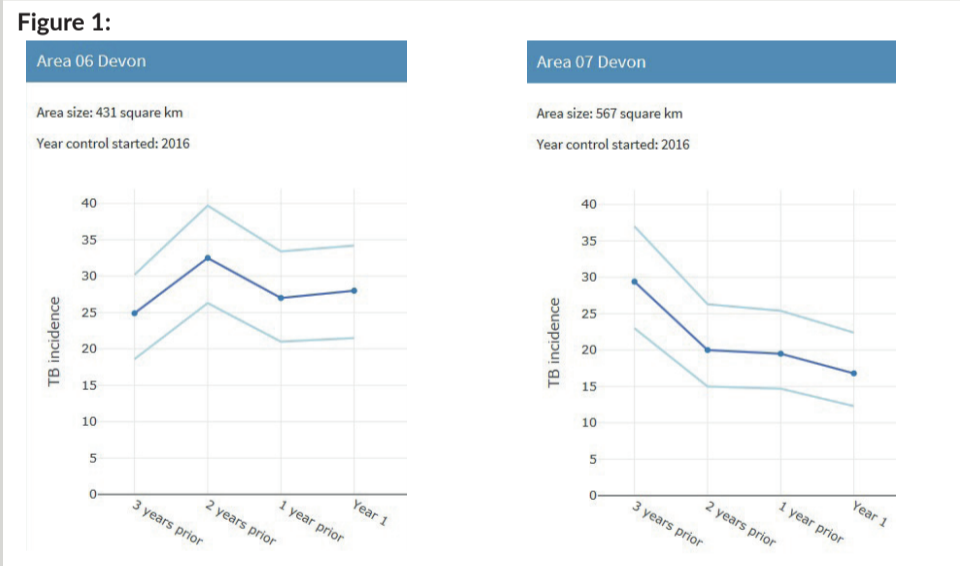 The TB info for the 12 months up to the end of 2018 for the whole of Devon is shown in Figure 2, taken from the TB Stats Dashboard at:

New TB breakdowns appear to have been declining since 2015, as does the number of herds in Devon under restriction at any one time. It’s worth pointing out that these data cover all of Devon, not just the cull areas. There are many other factors that may be at play and it is too early to be sure that this is a result of the cull.

Again, these stats appear positive. But to have greater certainty, we need to either:

• Compare our cull areas to matched, similar areas not being culled.

This sort of data analysis has been done on the first 2 years of the pilot cull areas in Somerset and Gloucestershire. So far it has found:

• 21% reduction in cattle TB incidence in the Somerset cull area.

• 58% reduction in Gloucester (relative to the comparison areas)

• 38% increase in the 2km buffer region surrounding Somerset area, but no increase surrounding the Gloucester area.

The authors of the paper are quite cautious with the interpretation of these results:

• It’s still quite early (only data from years 1 & 2), the real benefit is expected years later

• The pilot cull areas were not randomly selected

• Culling isn’t the only intervention in these areas – the TB Advisory Service is at work!

However, this study provides evidence that badger culling is causing changes in TB in cattle. The stats from the Randomised Badger Culling Trial in 2013 are broadly similar to early pilot culls results. Perturbation of badger setts is thought to have caused a temporary increase at the edges of the cull zone. This settled back down after a few years, but the benefit of culling within the cull zone has remained.

This article is a summary of web article on www.tbknowledgeexchange.co.uk by Dr Andrew Robertson, a badger ecologist who is working with the TB advisory service.

FLY SEASON IS UPON US – IT’S NOT TOO LATE!

Farm productivity and animal welfare can be improved by the all-important early application of external parasite treatment in cattle and sheep.

If treatment is delayed until significant numbers of adult flies are visible, it’s already to late to adequately control fly numbers. Rapid reproduction of the existing 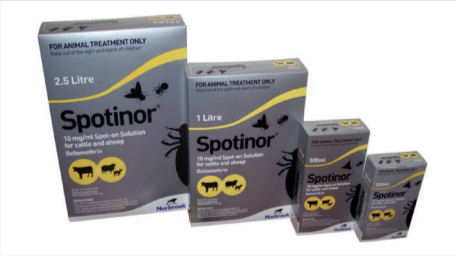 population will have commenced, and thousands of eggs and larvae will already be present on farm, ready to develop and compound the problem.

There are many risks of not treating flies and external parasites on cattle and sheep, which include reduced milk yields of up to 20%^ , increased incidence of summer mastitis, reduced calf weight gain and reduced reproduction in sheep.

This summer we are stocking Spoti nor® – a deltamethrin spot on treatment which is easy to apply and the simple dosing negates the need to weigh animals and so saves time. Deltamethrin is an insecticide known for its speed of action and potent kill – effective against flies, lice and other external parasites.

Taurador® Pour-on is a doramectin-based endectocide, licensed to treat gastrointestinal roundworms, lungworms, eyeworms, warbles, sucking and biting lice, mange mites and hornfly in cattle. It provides a stress-free, easy to use treatment, with persistent activity against a large number of cattle parasites, therefore ensuring effective coverage over long periods of the grazing season.

Taurador kills a range of internal parasites, but most importantly it is effective against the gutworms Oaterstagia osterstagi, Cooperia oncophora and lungworm, Dictyoicaulus viviparous, with persistent action against these parasites for 35 days, 28 days and 42 days respectively. Due to their life cycles, when cattle are at grass they can be ingesting gutworm and lungworm larvae on pasture over several months, Using a wormer with persistent activity against these parasites reduces the necessity to re-treat animals throughout the grazing season compared with other actives, as the time between treatments is extended and therefore more convenient and often cost-effective.

Taurador Pour-on provides a stress-free, easy to use treatment against the important internal and external parasites in cattle. With persistent activity against a large number of cattle parasites it ensures effective coverage over long periods of the grazing season.

Please speak to your local Torch surgery to find out more about Taurador. For more information on worming your cattle, visit www.cattleparasites.org.uk

Every year we do a number of caesareans on accidentally pregnant young heifers. This is a cost to both the vendor and buyer. Local auctioneers have advised us that they are seeing store heifers that have been scanned at the pre movement test have a stronger trade on the day,
purchasers prefer to buy these heifers.

Scanning is not required but is highly recommended by the auctioneers. If heifers have been with a bull in the last 35 days we will also recommend a prostaglandin injection.

Please let us know at the time of booking if you would like to scan your heifers.

Congratulations go to our two interns, Jess Partlett and Emily Dawson who
have recently gained their post graduate diploma in Veterinary Clinical Practice following a year with Torch Farm Vets. Both Jess and Emily have successfully
completed this specialist qualificati on in animal health and production and we look forward to welcoming them onto the team
as fully fledged clinicians in the coming weeks.

DATES FOR YOUR DIARY

Be sure to look out for us at the summer shows this year:

29 July – we are sponsoring and will be found inside the sheep marquee at Woolsery & District Agricultural Show; please join us throughout the day for a
pasty, cream tea and drop of Pimm’s!

7 August – we are the official vets on duty for the North Devon Show but you will also find us around the sheep rings as sponsors of the sheep championship, plus offering hot food, cream teas and more of that Pimm’s at our stand too.

22 August – come and see us on stand 14 at Holsworthy & Stratton Agricultural Show, we will have hot & cold food and drinks available all day.

We look forward to seeing you there!